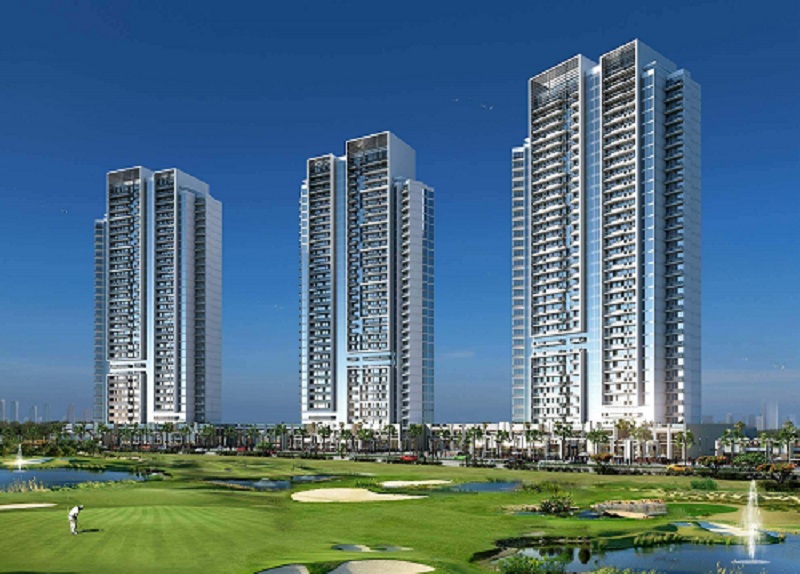 Damac Hills (previously known as Akoya) is a new luxurious residential community in DubaiLand which was developed by Damac Properties. The area is marketed and built as “The Beverly Hills of Dubai” and upon completion will have over 4000 luxury villas and 7500 condominiums along with luxury shopping, hospitality, spa and wellness facilities and leisure with addition to beverage and food components.

Damac Hills is more like a gated community with luxurious villas and apartments lined around the golf course on one side and 40000 square meters of parkland on the other side to provide the residents with a soothing, calm and peaceful environment by living in the lush green scenic atmosphere.

The apartments and villas located in the Damac Hills offer a picturesque view of the Trump International Golf Course and lush green parks. The residents can either polish their golf skills in the golf course or spend their day strolling around the parkland. Apart from this, the area is designed in a way to keep people occupied in their own personal space and do not feel like leaving it; therefore, the projects offer a wide range of exciting facilities for the people to keep them occupied in their leisure time and they get to spend most of their time near home with their friends and families.

The only company associated with Damac Hills is Damac Properties which is the Master Developer of the whole project; that is why the project is named after Damac.

Damac Hills feature The Drive, which is a 2.5-kilometer retail walk inspired by the Rodeo drive in Los Angeles. It is larger than the Walk JBR Marina and is home to several restaurants, cafes, retail outlets, outdoor cinema, children’s entertainment, along with an outdoor skating rink. All of this being lined up around the hotels and apartments located in the Damac Hills.

You can get hold of the fine dining restaurants in Damac Hills along with supermarkets, laundry services, pharmacy and other conveniences at the second retail precinct called The Catwalk.

Trump International Golf Club is one of the best in the Middle East having an 18-hole championship golf course which was designed by Gil Hanse. The course has a large clubhouse, having high-end restaurants, a wellness center, a spa, and a pro shop.

The properties located on Damac Hills are divided into the following categories. These categories include: